The San Francisco Bay Area is getting ready to host Super Bowl 50! They’re adding glitter to the golden anniversary game as they prepare a bevvy of celebrations, parties, and events to make the city Super Bowl ready!

There are many new events coming to the city as well as perennial favorites.  Some events include a planned Super Bowl City, the NFL Experience, a special Pro Football Hall of Fame exhibit in Santa Clara, a secret headliner performer, and a Super Community Ball. As part of the NFL Experience, there will be interactive throwing and kicking games to let fans participate in what it feels like to kick a game-winning field goal. For kids there will be an NFL play 60 zone. There will be opportunities to take photographs with the Lombardi trophy, and each of the past Super Bowl rings. There will also be favorites players, past and present, on hand to sign autographs. The NFL is really going all-out for this huge anniversary! 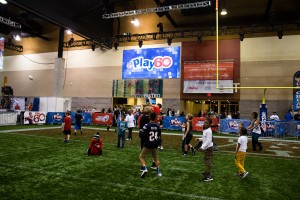 The mayor of Santa Clara, Jamie Matthews will be preparing the location of the stadium as well.  The city will be building up to the Super Bowl locally by opening an ice rink, which has never been done before. They’ll also do a Christmas tree lighting. Each of these events will be highlighted with fireworks! Who doesn’t love fireworks?

The community is also giving back to the community as well. They’re taking great steps toward civic responsibility. The 50 Fund program was created to use the power, prestige, and recognition of the Super Bowl to focus on youth development and sustainability. 50’s Fund, The Re(a)d Zone, will promote literacy to ensure that this Super Bowl leaves a positive future impact for the community. It’s always great to give back to the great football community.

The Super Bowl will arrive at Levi’s Stadium in Santa Clara on February 7, 2016. If you’d like to go to that game Super Bowl Tickets are still available as are Super Bowl travel packages. Can’t wait to see what San Francisco has in store!